It’s been a pretty positive start to the week and now the month, just what I needed! There’s been some really shitty parts to this year, especially in the last few months so I’m determined to send 2015 off in a positive year and look forward to 2016…even if I am a little bit terrified of it! I wasn’t feeling particularly great about today, I was anxious about my gym class because of the pain I’ve been having but it turns out I didn’t need to be. That said I was already in a good mood from last night after having a long and lovely Skype conversation with Eleanor, it’s hard with her being all the way in New Zealand but we’re making it work.

Of course today is December 1st (I know, how is it December already?!?) so it’s advent calender time but since I haven’t been back home in a while I had no advent calendar this morning…the first time since I was 1. Luckily Mum text me a picture this morning of a maltesers advent calendar all for me, yay! I also picked up Star Wars ones for me and Ali too because IT’S FINALLY STAR WARS MONTH AND MY TICKETS ARE BOOKED, AHHHHHH.

As always I trekked to the hospital for 9am *sob* for my morning gym recovery class. I’d had a rough week last week so I was lucky I could talk to Mum before going and try and get in a good mindset before going in, got mistaken for a student nurse (I wish!) and got told that ‘surely I still have time to grow’ after I complained I was so tiny… the people in the class thought I was in my teens. Of course the real reason I was nervous was pain but I tackled all the machines, including a new one, and I kicked butt! There is no better feeling for me at the moment than coming home covered in sweat and knowing I’ve worked hard to get better, even if I do pay for it later. Oh and because my physio instructor for the gym is amazing I got given a sticker because I worked so hard…being the youngest has its perks! 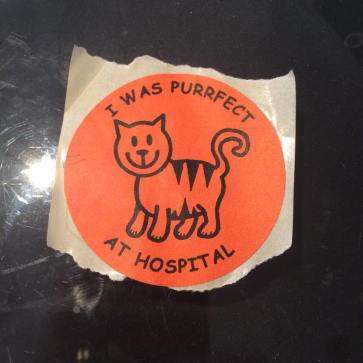 Another really amazing thing is that as I’ve mentioned before I’ve struggled with the fact I’ve put on weight because of the accident and recovery, as well as the implications of my medication. As I wrote before I won’t mention numbers on here but I can confirm my healthier eating habits and gradually building up movement is working I’m finally losing the weight I gained!! I’m really proud of myself for doing something healthy and my strength in will power!

I ended a good day with a great evening at The Fighting Cocks with Ali, Charlotte, Rhys and later Joe. I got to play in the quiz, laugh a lot, get drawn on and just get out of the house with no expectation to get drunk which was really nice. It also helps that whenever me and Charlotte hang out we can’t stop laughing.

I’m stupidly excited about this start to December and I hope more than anything it carries on!