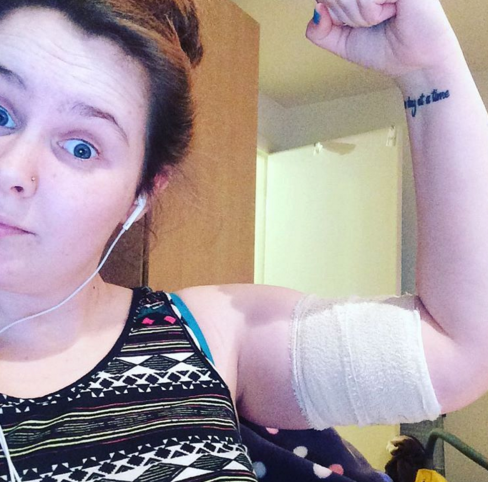 Do my biceps look big in this?

Like many other 20 somethings I decided that right now wasn’t the best time for me to have a sprog. Not only am I still living on Student Loan I also feel that my hamsters are more than enough for me and I’m always exhausted after looking after my goddaughter. So today I was booked in to have another contraceptive implant put in my arm and the other one removed. Of course I thought I’d take you guys along for the ride because getting this was really important to me.

I’m aware that some of you might not have heard about them before or know what they do/ how they do it, so here’s some info from the NHS website:

The contraceptive implant is a small flexible tube about 40mm long that’s inserted under the skin of your upper arm. It’s inserted by a trained professional, such as a doctor, and lasts for three years.

The implant stops the release of an egg from the ovary by slowly releasing progestogen into your body. Progestogen also thickens the cervical mucus and thins the womb lining. This makes it harder for sperm to move through your cervix, and less likely for your womb to accept a fertilised egg.

Yep, that’s all the boring and gross stuff. Basically if you know you don’t want kids for at least 3 years it’s a great way to not get pregnant. As you will have been told at school there are lots of ways to be protected so why use the implant? For me it’s because I only have to remember to get it changed every 3 years and I’m too scatty for the pill. It’s also because last time I had it, it made my periods lighter and less painful (if that’s not a win I don’t know what is).

I will admit I had some reservations though, the problem with getting an implant is that it needs to be inserted. You get local anesthetic to numb the spot and then it’s put in with what Ali describes as a box cutter. I think the anesthetic needle is the worst part because that’s the only part you feel when you first have an implant inserted. You do feel it inside your arm a little but that’s more weird than anything.

I asked on Twitter and Facebook what people wanted to know about having one removed and another reinserted and what came up most was pain and how that compares to the first time. For me getting it taken out was not the problem. My body is weird with local anesthetic though and let me stress I’m the ONLY person I know this has happened to, I could feel a little during the incision but only for a minute. My doctor offered to stop but I decided to carry on because it was stinging more than anything. So the old implant is pulled out (sometimes it takes a little longer if it’s hard to find or won’t come out as easily, in the worst case they’ll scan your arm to find it first) and that’s all fine and dandy. I then had a little more local anesthetic added to my arm (probably because I had some feeling before, although not enough for it to hurt) which was annoying because that bit hurts. Then the new one was put in, I felt that a little (similarly to the first time) and it was done. I was wiped up and with my lovely super pale skin I started to bruise straight away but it was done.

All in all it took less than 5 minutes and I was talking to my doctor the whole time. It’s really worth it and I don’t think it was more painful than the first time. Honestly the only thing a normal person needs to worry about feeling pain is the anesthetic needle and that’s over pretty quickly. I’d definitely recommend it for someone young like me who wants to make sure they’re covered.

Obviously I’m not a doctor and there’s a load of other stuff that I’m not well versed in about potential side effects, who can’t have it and all that stuff. If you’re interested definitely talk it over with your doctor and don’t read horror stories online some people love to scare others. Even though I’m sitting here in a bandage and I’m starting to feel sore I don’t regret it and I have peace of mind now for another 3 years.

One thought on “No babies please! – My Implant!”