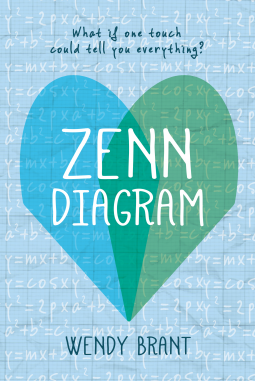 If one touch could tell you everything about a person, the good and the bad, what would you do?

As a high school math genius, Eva is used to not being the most popular, but this suits her just fine. While the rest of the school thinks she’s simply a germophobe, Eva is protecting herself from their deepest secrets, their joys and fears, all from a single touch. It isn’t until Eva meets Zac that her gift haunts her more than ever.

It’s been a long time since I picked up a YA novel that I knew was going to involve a love plot. I requested this via Netgalley and was approved by the publishers to give a fair and honest review. I won’t lie, I wasn’t expecting to love this novel as much as I did. If you’re looking for a novel with love and a twist then you’re in the right place.

I connected with the character of Eva almost immediately, while I initially was thrown by her gift and what it meant for the novel. I’ll admit that it did take a while for me to get used to it, but the choice of gift itself was well put together. The fact that Eva has her own life and struggles made her more relatable. While I was initially sceptical about the introduction of Zenn and what this would mean for Eva’s smart and focused character, it actually added a great deal to her and the plot itself.

I think one of the best parts about the novel, however, is that it also have strong comedic value. Eva is not only funny, she is also fiercely intelligent, something that we definitely need more of. As the novel went on I liked both her, and the character of Zen more. I didn’t roll my eyes, nor did I get frustrated because she felt real to me. This was a character that I could see myself in, someone who struggles with what it means to be a ‘good girl’ but also know sadness.

I gave this novel 4 stars. It’s definitely an uplifting book and while it does tackle some issues, there is enough appropriate humour and intelligence to make it an uplifting read. Brant has a true talent for writing fantastic novels with relatable and intelligent protagonists. I would highly recommend this novel to all who need something a little different in the YA market.