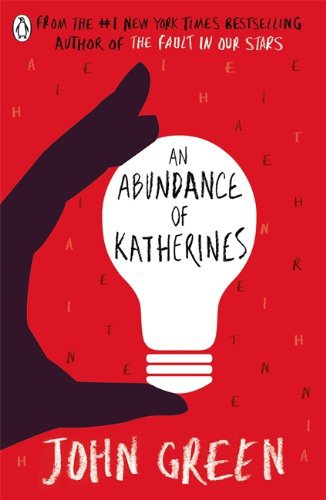 “How do you just stop being terrified of getting left behind and ending up by yourself forever and not meaning anything to the world?”

It’s a known fact that I think John Green is a genius and I ended up buying and devouring any book of his I pick up. I chose An Abundance of  Katherines as my third John Green novel to read about Paper Towns although this novel isn’t bad I wish I had chosen to pick up the latter.

Colin Singleton is a child prodigy, his mind is incredible and he is expected to do incredible things, that is until he hits a limit and start to wonder if he’ll ever have a ‘eureka’ moment. It doesn’t help that Colin has yet again been dumped by another Katherine, number 19 to be exact. To get away from it all, with the help of friend Hassan the two boys take a road trip after graduation and end up in Gutshot, Tennessee and end up having a very different experience to what they had planned.

While the pair find summer jobs in Gutshot and make friends with the beautiful Lindsey, Colin still has Katherine’s on the brain. He settles down to work on the mathematical likelihood of relationships, starting with Katherine one and working through them to perfect the equation. Although it doesn’t sound amusing it is and doesn’t take up the whole book which I was thoughtful for. What I think this novel is really about is a young guy who’s trying to work himself out through the only way he knows, math.

Although the novel was interesting and again Green has worked his magic at making believable characters and that loveable and slightly annoying nerd at the centre of it all, I wasn’t as hooked as I had been with previous novels. Throughout the novel I really didn’t understand the importance of all the Katherines and felt quite confused by it all! On top of that, to match Colin’s character there are a lot of foot notes with various explanations, comments etc and for me it didn’t help. I like getting lost in a novel and I just felt that the footnotes took away from that and made me think about them too much. Although that said I know people who found that to be the best part of the novel, so it really is down to personal preference.

I want to give An Abundance of Katherines 3 stars. I did like it but it’s not my favourite John Green novel. As with Green’s other novels you can’t help but feel as if you are friends with the characters and have your own hopes for them. I would have liked to have known more about genius Colin and what Lindsey did next but that’s not what this novel was about. From my experience of reading it I felt like it was about having that time before a big change to figure yourself out, as usual Green has been fantastic in getting into the teenage mind.