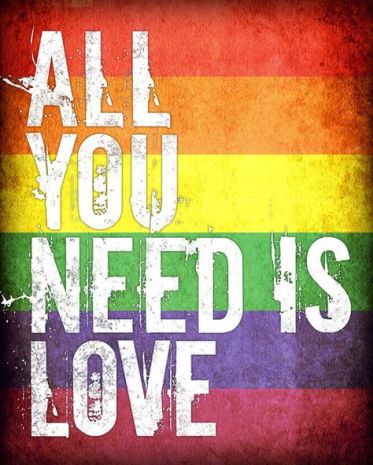 I’m writing this with a heavy heart, as a lot of people are around the world. You can’t have missed the terrible news that yesterday a gunman entered Pulse nightclub, murdered 49 people and injured 53. Pulse is a club for LGBT people, this was a planned attack on a community and has since been named the worst attack since 9/11 and the deadliest shooting in the United States. I could get into so much in this post, about my anger about the scum that did this, about my anger towards America’s gun laws but I won’t, because the last thing the world needs right now is more hatred. I refuse to think about him, his twisted ideas. Instead I want to know the names of those who died and those whose lives have changed forever.

I watched the coverage from the moment I got up, when I was first aware, to now. There’s still a tab open on my laptop with BBC updates. What I can say though, and something that hasn’t surprised me is the reaction from the LGBT community, because around the world they have stood together, they are mourning but they are strong. People will attempt to dismiss this, to take away from the fact that this was an attack on the community because of who they are, who they love, but they can’t. The LGBT community and all of us allies are going to follow their lead and do what they do best, we’re going to fight back with love and stand united.

I’ve never understood ‘homophobia’, which FYI isn’t a real thing, I’ve never understood people hating anyone for who they love. I have friends who are gay, know a lot of people in the LGBT society and you know what, they’re just people. So what if they don’t conform to some bullshit social norm, most of us don’t nowadays anyway! I sat yesterday and just tried to understand, asking my boyfriend why? Why would someone do this to innocent people?

We all need to stand up and be counted now, show our solidarity. Hatred will not silence the wonderful, brilliant community. We must stand up and give support to those affected and to every LGBT person, we need to show them we will do whatever they need so that they can feel safe again. We’ll attend Pride, we’ll write blog posts, we’ll tweet our love, we’ll support them and go against anyone who wants to take away their rights. We will be there for them.

Let’s not shy away from that this attack was. This was an attack on the LGBT community, call it what it WAS, unlike the Sky News presenters this morning.  I write while holding back the tears and thinking about each and every person lost in this tragedy, wishing I was in Orlando, that I could donate blood and that I could help. I will say though that you will not be forgotten, your deaths will not be in vain. I’ll continue to stand with the LGBT community, as I always have, defending their right to love whoever they want to. I stand with you. We’re all human and Love is Love.

Someone did not want to get up so I could clean her cage this evening. 😂
The worst part is, about 15 minutes later I was the one covered in mud 🤦‍♀️
Back to normality ☕️
When you love a sight hound they have your heart forever. 💙