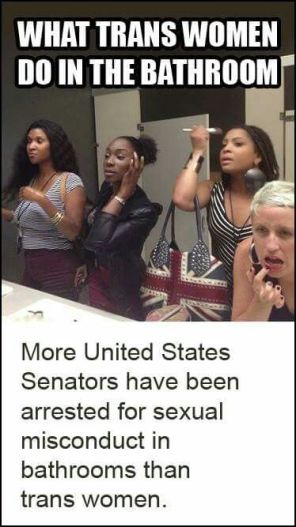 The internet has been flooded today with people’s anger and disgust at North Carolina’s new Bathroom Law, a direct attack on Trans people that dictates the bathrooms that they can use. Aside from this, the run up to the law being passed was was filled with hatred and lies about the Trans community. An outcry of uneducated people stating that Trans people will molest others in bathrooms, lead to a lot of people freaking out and hating on the Trans community even more. It was another lie for transphobic senators to get their own way and gain power over a minority.

Although I’m still very shocked that this bill could have even gone through, the reactions of the rest of the world has made me feel better. Concerts have been cancelled, conventions have been cancelled and companies are pulling out of activities and sponsorships related to the state. These actions send a powerful message to the government, hate will not win. It also says that we stand with the Trans community.

We will keep fighting and hate will not win.

See you again soon, London.
Sisters 💙
When Kourtney Kardashian had a leather ‘Mrs’ jacket but you got there first 😉
This too shall pass 🌈