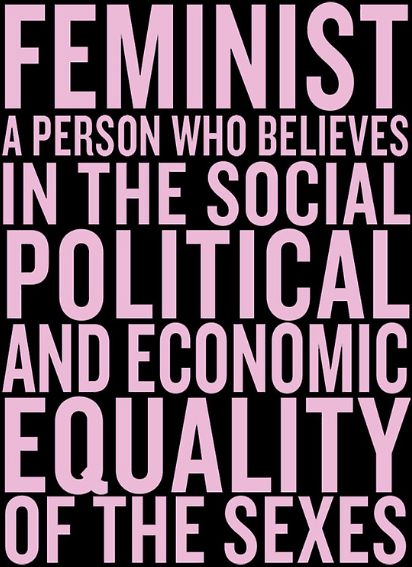 A lot of people may see the title of this post and think, so what? I’ve thought about writing this for a while and put it off for no reason other than I didn’t want to get this wrong. I am publicly declaring I am a feminist and anything I thought or wrote before is now over written. I’ve always been a feminist but I hadn’t always liked or used the word. I’ve been a feminist since I was a little girl where I’d shout GIRL POWER at everyone while wearing girl power temporary tattoos and would play armies at school and take charge. I’ve been a feminist since I got bored of barbie and used to sketch out my own dolls who could do anything and be anything. I’ve been a feminist since I was a passionate and angry teenager and later and excited 17 year old who saw a poster for the feminist society at university. Then something changed. I came to uni and got in an argument with a male feminist about how oppressed and angry I should feel. As a rule I hate being told what I should and shouldn’t do or feel, more people tried to fit me into a mold so I decided I didn’t want to be a feminist if that’s what people expected of me.

For a long time I, like a lot of young women, refused to call myself a feminist. I didn’t like the way the word had ugly connotations of man hating, being angry and not wanting to shave or wear a bra. I hate body hair on any human and I love a good bra. I’d say I was a humanist and other things like that, I got in arguments at uni and a lot of ‘feminists’ made me feel like I had to conform to their way of life. Fast forward to when I broke my spine and had a lot of spare time on my hands and something changed. I picked up a copy of How to be a Woman by Caitlin Moran for my Writing Women class and it spoke to me. I suddenly felt like I belonged and I could be a feminist and still be myself.

I read and continue to read every book on feminism and strong women that I could get my hands on. I got more interested in politics and women in an international context. I was happy talking about feminism and debating with others. I wanted to be part of a great group of men and women who wanted positivity and empowerment. I’ve said too many that I feel feminism is something you need to discover for yourself and not just tell people WELL YOU ARE, that just pisses people off. I found, fell in love and embraced feminism. I love women like Roxanne Gay too who question what it means to be a feminist in her book ‘Bad Feminist’, because I don’t think there is one true way of being a feminist.

I’m all for women going out and getting a career but I’m also totally supportive of stay at home Mums. My first female role models who I spent time looking up to were my Mum, my Aunt and my Nanna all three are incredible, powerful, kick ass women and all three were stay at home Mums. I also admire working women too, I’ve learnt a lot from my boyfriend’s Mum, who’s always worked. They’re all different and all deserve to be respected for different things.

I could go on and say all the things we need to fight and put right in the world gender stereotypes, rape, female education around the world, the children debate, etc. I could write about all the men on Twitter, when I posted about equality, who told me I was wrong that the pay gap was a myth and feminism wasn’t needed anymore. I could apologise for being young and naive when I said I wasn’t a feminist. Really though, I just want to say that I’m a big fan of feminism and other women. I don’t want to get angry and compete with them or knock them for every little thing. I certainly don’t want to stand up and go well women are better and men suck, I love men!

I’m writing this because I felt like it was the right time for me to say. I’ve been thinking about feminism instead of sleeping and looking up more books to add to my collection. I know there are some fantastic women out there who I’ve yet to meet and I also know there are people who will judge me first on being a woman before anything else, but you know what I’m excited. I’m excited that I’m a part of this community and that we live in a time where there are so many people working for equality and hopefully less hatred.

So there you go, I’m a feminist, how about you?