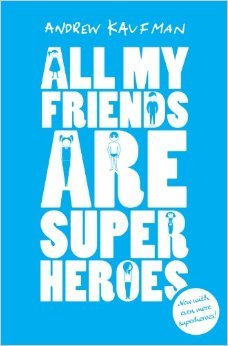 All of Tom’s friends are superheroes, even his wife the Perfectionist is a superhero, because of this certain parts of his life aren’t like anyone else’s. Like his wife, everyone’s strongest trait is their superpower and so you end up with some interesting heroes,like the Dancer, the Stress Bunny and the Phoney.  I’ll mention now that my copy is a newer edition with even more superheroes and with that, even more great illustrations for them!

All My Friends Are Superheroes is first and foremost about love. Ultimately it is a love story that goes pear shaped and has some invisibility thrown in because of an ex, but a love story none the less. Six months later, when the Perfectionist thinks that Tom has simply abandoned her, she decides that she’s going to move and use all her powers to forget about Tom and make a new life for herself. Little does she know Tom has been by her side the whole time and is racing against the clock to make her see him again before it’s too late.

I loved this story it’s short, funny and cute. Kaufman certainly has a talent for writing, as soon as I finished this (in one sitting no less) I went to my local bookshop to pick up another one. These books are great if you want to read something quirky, fun and short, which is particularly brilliant as a lit student because sometime you need a break from serious books. The character of Tom was brilliant too, he seems to be such a sweet man and genuinely loves his wife, which makes a nice change.

The superhero names were also great and it really did make me think about the people in my life and what superhero they would be. Kaufman has not only created a really funny and well thought out book but also one with heart, one that makes you think about life, which I didn’t expect when I first started reading. It got me thinking about which superhero I would be and which one I’d actually want to be. I’d probably be either the Bookworm or the Worrier, because that’s two of my most defining traits above all else.

I would definitely recommend this book for your shelf because, ultimately, you can read it again and again if you want to. It’s so short that it hardly takes up any time at all and the story is one that you won’t get bored of. It’s because of this, as well as the great writing and illustrations, that I’m giving All My Friends are Superheroes five stars *****. Every now and again even the most determined of us need to wind down and this is the perfect book for that. Keep your eyes peeled later on for other reviews of Kaufman’s work! I can guarantee there will be more!

Hello beautiful boy 😍
It’s been a while...
Feeling like myself again!
I feel that for my first trip back to @waterstonesbsk this was quite restrained...