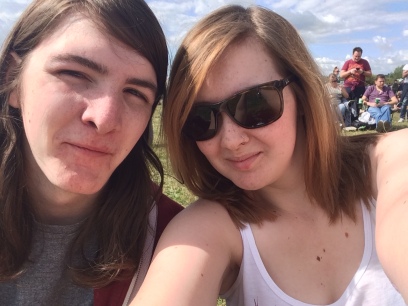 Ali and I at Reading Festival

I was one of the lucky ones who managed to get tickets to Reading Festival this year. As I entered Friday’s sold out arena I had one goal, to come out with an honest opinion of a festival. Now I’ve been to day festivals before, seeing Kids in Glass Houses, Don Broco and Lower Than Atlantis back at Butserfest 2012 was a great moment, playing Basingstoke Live this year was another, but I’d never been to one of the ‘big’ festivals after watching Reading and Leeds for the last few years. So after arriving pretty later I found it easy to just walk in, only having my bag searched (which I found really surprising) and get into the arena and sit at the Main Stage for the majority of the day. 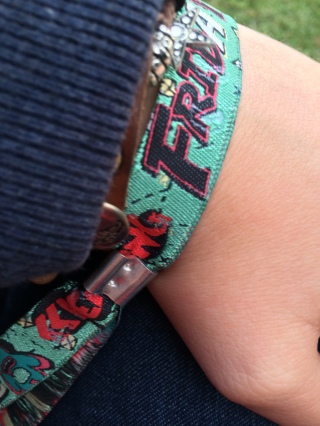 I’d heard of Blood Red Shoes before but I’d never really listened to their music before. They seemed pretty good and I liked their overall sound, something was missing though as I listened. Even with some well matched vocals, a killer female guitarist and all three of them being able to sing. I couldn’t put my finger on it, then I realised there wasn’t a Bass Guitar, which seemed to hinder it a little. I also noticed the difference between their old songs and new songs as they introduced them, the old songs seemed to be a lot stronger, whereas their new stuff seemed a little too repetitive.

I’d seen Deaf Havana acoustic last year and wasn’t disappointed. So seeing them at Reading was one of the main reasons I bought a ticket. The set was different to what I expected, but not in a bad was necessarily. As the set went on the guys seemed to relax, although they shouldn’t have worried. As soon as they began to play, a mix of their new and previous album, people ran towards the stage and a sea of Deaf Havana T-shirts were clearly visible. The fact that they snapped a string didn’t matter to the hundreds of fans they had pulled in and in fact added to what I’d already known – Deaf Havana is full of nice guys who generally respect and appreciate their fans. As if they haven’t gone far, they’re going to go even further still. I did miss hearing some of the older albums but as a lot of the bands I listened to in my early teens, the musics changed and although it is sad, we accept that.

I was actually pretty disappointed by Jimmy Eat World’ set. It got to the point where I got pretty bored and headed off to the NME stage instead. The performance just seemed kinda average in comparison to some of the other people playing on the Main Stage. Of course when it came to playing their biggest hit The Middle the crowd were dancing and having a great time, that said I don’t know if I’d pay to see them on tour.

I managed to catch the end of Mallory Knox’s set and kicked myself. We got down to watch the last two songs and I wish I’d have gotten there for the start, the place was rammed and the crowd were going absolutely crazy, the boys have slowly but steadily got bigger since I last saw them on the bill at Butserfest 2012. After seeing just two songs I want to get the album and THAT is how you do it at Reading!

I was really excited to see Enter Shikari’s set, I’d heard they were incredible live and Sorry you’re not (a winner) has been a top track for me since I was about 15. The music side of the set was fantastic and I don’t think I’ve ever seen a more energetic audience. It was absolutely fab, that was until the rants started, about just about anything. For me becoming a preachy band kind of ruined the set a little bit, I just wanted them to play the songs we know and love! Other than that absolutely fantastic!

How these guys got to such a high point on main stage I don’t know. Although they had a huge crowd I was so bored throughout, comparing the sounds to those you get on kids TV. Their two most well known songs I liked and recognised but other than that all the music sounded exactly the same with noises made rather than words….I won’t be going to see them again any time soon. Or ever.

It’s no secret Paramore are my favourite band. Ever. So as it started to get colder I held on to this while we waited and got a great view of the stage. As usual they were absolutely incredible with fantastic lighting and so much energy that it came through to the audience. We danced, we sang our hearts out that was until the power started cutting out and then it completely cut out. Hayley thought it was because we didn’t want to hear a slow song! When they then realised and couldn’t hear themselves they proved just why they should be Reading and Leeds headliners. They came to the front of the stage with acoustic guitars and said ‘we’re not moving until this is sorted out’ before Hayley sang an acappella version of ‘The Only Exception’ with the crowd. The effect was chilling and something no one who was there will forget. The rest of the set was incredible and possibly the best I’ve ever seen them, including a dinosaur singing Misery Business. It made me proud to be a Parawhore.

As the rain started to come in and I started to freeze I headed home rather than waiting through the 45 minute change over for Queens of The Stone Age. Instead I was at home by the time  they started and able to watch their set online which was pretty good but I’m glad I watched it from home.

Reading festival was pretty cool and depending on who’s playing I might be there again next year, give it 5 years and I might even be playing 😉