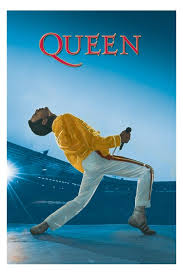 King Freddie gracing the stage of Wembley, the way he held the crowd was incredible

Ever since I was a little girl I’ve always been in awe of Wembley stadium. I went with my parents to the old stadium when I was small we have pictures of me holding various trophies (what they were I don’t know) but the football wasn’t what started me off. So many of my favourite bands have played Wembley, although I haven’t been to a gig there yet I still wonder what it feels like. I think about what it would be like to stand on that stage with thousands upon thousands screaming back at you, a musicians dream.

So maybe I didn’t play Wembley last night for real but I certainly was in my head, the SU came alive! The boys and I finally took to the stage as an electric band…it was amazing. It helps when you have a friend in the crowd who knows the lyrics..that makes you feel like a bit of a rock star. I was nervous and panicked before hand honestly not knowing how to pull this off but we did it! The fun members of the audience (who didn’t sit miserably at a table) were moving and cheering through the whole set. Despite starting with a broken string the rest of it ran smoothly with very minor mistakes. I was just so grateful to all the people who showed up and cheered and just enjoyed our music.

I also ended up talking to people about the lyrics afterwards, it made me realise  that pain can actually be worth it. Try telling me that six months ago when my heart was broken! All the living I do comes out in the slightly messy way of my lyrics and last night I felt and lived them. The past is gone, I can’t change it and I can’t live in it so I’ve got something new to look forward too. My confidence has soared I feel like we could actually get somewhere with this (please like No People Club on facebook!). The best part was being compared to three of my idols after being told people want to buy our music, they were that into it!

The bottom line is that it’s times like these when I can accept myself for who I am, if it wasn’t for the depression would I have written the way I did? I don’t know but I do know that the hurt that went onto those pages is really paying off. So keep an eye out in the future, No People Club are on the way to the top…hmm this could mean a new tattoo.