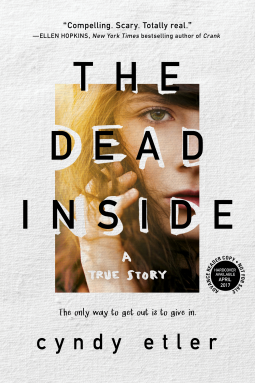 ‘I never was a badass. Or a slut, a junkie, a stoner, like they told me I was. I was just a kid looking for something good, something that felt like love. I was a wannabe in a Levi’s jean jacket. Anybody could see that. Except my mother. And the professionals at Straight’

Cyndy Etler has had a difficult life to say the least. After the death of her father as a child she is left with her mother, and later, her husband. As she lives through a torrent of abuse at his hands, her mother simply looks the other way as her daughter cries out. After she finally breaks Cyndy wants nothing more to do with them and runs away, but her new nightmare has only just begun as her mother deposits her to Straight Inc.

When reading this prepare for a story of abuse and misbelief. I was both shocked and appalled at the treatment that Cyndy received from the institution she was placed in. In Cyndy’s words they are extreme forms of physical and mental torture against young people that, to put it simply, were broken. When they entered I can’t help but think may of them had Cyndy’s fire and passion, her spirit. It is, horrific, that these children and that is what they were subjected to, the cruelty and brainwashing.

I will admit that, initially, Cyndy did have a kind of ‘wild child’ personality, however, I would urge you not to dismiss her from this. This is child who has been subjected to horrors before she enters the nightmare of Straight. This, I felt was unclear in the earliest chapters, which could make people distrust or not understand Cyndy. I can understand why it is not so bluntly put, this is a tough and long road for Cyndy, both then and now to describe what happened to her. What I saw the most was a girl who wasn’t loved, who tried to make her own way in the world and who was abused by the people who should have loved her.

I gave the memoir 3.5 stars, not because I didn’t devour it, not because it made my heart hurt but simply because I found myself confused at times about what was happening. The voice speaks true of what was happening and the confusion that Cyndy felt, however, at times it made for difficult reading. There were also some parts which I felt could have been given more time, that said, I know that she has another memoir coming out towards the end of the year, as per her website. I’m hoping that this will let me understand more of Cyndy’s life, recovery and past. Thank you to Cyndy, her publisher and Netgalley for this ARC.