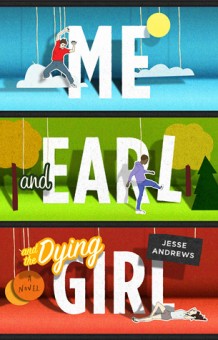 “If after reading this book you come to my home and brutally murder me, I do not blame you.”

Greg tells us from the beginning that he has no friends, apart from Earl who’s the closest thing he has to a friend because they make movies together. He’s happy to be on his own, being a loner at school will get him through high school almost unnoticed. Well, that is until his mother asks him to comfort a childhood friend who has cancer, how can he say no to a person with cancer?  After Rachel stops her treatment for Leukemia, Greg decides to make a film for her and this is that story.

There was a lot of hype around this novel, especially when it was announced that it would be turned into a film. As always I wanted to read the book before seeing the film and now I don’t think I’ll be watching the film at all as this novel really isn’t what I thought it would be.

There is a time for self deprecating humour, but throughout a whole novel is not the place for it. I understand that it is part of that character and how he perceives himself and the world but the character of Greg drove me insane throughout the whole novel. It felt as if Andrews wanted us to hate the book, it got old pretty fast.

The novel just didn’t sit well with me, while at times it was honest I couldn’t get on with the narrative style, that doesn’t mean it was a bad book, just not to my taste. I think one of the things I struggled with was that I don’t think Rachel was fleshed out as well as she could have been and Earl was very stereotypical.

Overall I really didn’t like this book, there were points the felt kind of sweet but this was quickly taken away. I just felt that I couldn’t connect with Greg at all and if I’m honest he just annoyed me. This made me really sad as I’d heard so much hype about how funny and charming it was but I honestly didn’t find like that at all. With that in mind I gave it a 2 star review BUT I do think this would work a lot better as a film just because of the way in which it is written.

So, should I watch the film? Did you like the novel? Let me know in the comments below!

0 thoughts on “Book Review: Me and Earl and the Dying Girl- Jesse Andrews”

The only way to eat @zizifactorylondon😉
Last night with with @books_and_bullshit. 🍹
Things are getting spooky 👻
My Mr doesn’t mess around when it comes to birthday presents. SO worth waiting until the studio tour. 😍