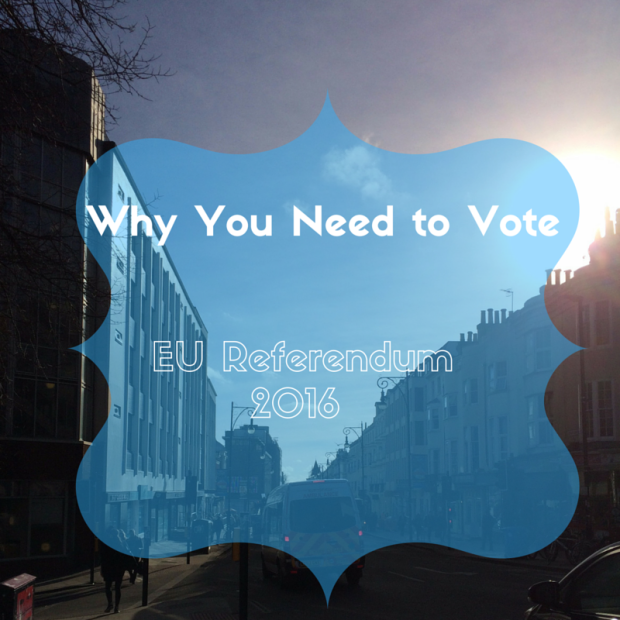 Tomorrow is the day that we make one of the biggest decisions in British history, whether or not to stay in the EU. While I’ll admit the campaigns have been more than a bit of a shambles and a lot of people still feel unsure or confused about that exit I’m writing to all you guys to urge you to go down to the polling station tomorrow and tick one box or another.

The main reason you need to vote is that people died so that we could have a choice, because we are lucky enough to live in a democracy. There is the old attitude ‘if you don’t vote you can’t complain’ and to some extent I agree BUT what scares me is that a lot of people are believing statistic that have not been proven and it’s become a contest between who can shout the loudest, rather than looking at the key issues. There’s a lot of anger over immigration, people shouting that they want their country back, that we’re run by Germany and blatant racism. I honestly regret how both sides have acted in this and think that it’s actually bought out the worst in our country and that makes me really sad.

I’ll be honest with you, I’m voting in, which is different to the majority of my family I think. I’m voting remain because I’m proud to be a part of the EU, I really like that we’re part of a group of  countries with a rich culture and history and that I can move and travel as much as I want to all these beautiful places. I’m voting remain because even though we have our issues, I don’t think we know enough about what would happen if we leave to our economy and I don’t want to have to live through another recession (my Dad lost his job in 2010, when I was 15) because we guessed we’d be better off. I’m voting in because I believe that immigration makes us stronger, do we need to look at the amount of people we let in and other issues, because I’ve studied with some brilliant minds who are living here because they’re in the EU.

Above all I want to suggest something I saw online today. Suppose you really don’t know what to vote, you’re just looking at it going neither side has really convinced me. IF you vote to remain we have a chance to do this again. We have a chance to tell the EU what we want to do/ how we think it could be improved for members and if they don’t comply and AFTER we’ve done some more research into what will happen we can all vote to go, I’m all for that. At the end of the day I am just urging people to vote, whatever you want make your voice and your vote count.

One thought on “Why You Need to Vote: EU Referendum”

Catching up with the mother in law to be 💙
Spice Girls, Gin, Jacuzzi.
When @kyliecosmetics by @kyliejenner is finally available in the UK and you treat yourself. 💋
Just proving I have actually been out in the sun before the week of rain. 😂