After Royal Mail finally delivered my parcel, not cool to say I didn’t answer the door guys, I got this months Loot Crate. This month’s theme is Vs, I’d already been told there would be something Harley Quinn and something Daredevil related so I was quite looking forward to picking up this month’s box. Now let’s see what’s inside….

For our first item let’s take a look at this month’s t-shirt. Apparently, every Loot Crate from now on will have a t-shirt in it, which is really appealing to me, because I know there will be at least 1 good quality item in the box every month. This month it was a Star Track shirt, referencing mirror mirror. I’ll hold my hand up and say that I’ve only seen the new movies in the Star Trek world (I’m more of a Star Wars girl myself) but, I think Spock is a great character. I also love the design with a vintage feel and it fits really well too. I’m also planning to go and watch this now to see what everyone is talking about.

I’m not a fan of sci-fi/horror combinations. In fact anything involving horror I’m not keen on watching, but my boyfriend really liked this. Anything I’m not keen on and he is, I give to him. I will say this is also an exclusive (a lot more of these lately), you get one of two and then there are a load more you can also collect. The actual figure itself is good quality, stands up on its own and glows in the dark. Overall, not my thing but I am impressed with its quiality. 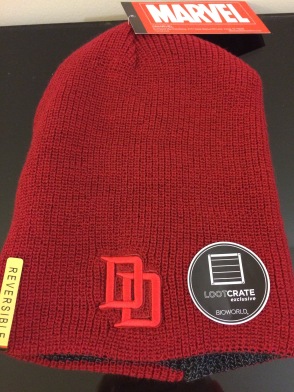 I’ll admit now that when it comes to Daredevil I am late to the party. I plan to have a binge watch over Easter Weekend if possible. Even as someone who hasn’t watched Daredevil yet I love this hat. Not only is it reversible but it’s also a lovely hat. It’s really thick, warm and cosy and I can see the boyfriend and I fighting over it. I hope I love Daredevil, because I really want to wear this hat.

Loot Crate have worked with these guys before in a previous box (before I was collecting) and I remember not being too impressed. They’re a nice design, saves the environment and apparently can take quite a beating, but I’m just not keen on them. I’d rather have something a little more sturdy and durable.

Another exclusive! I absolutely love Harley Quinn, she’s smart and crazy. You might call her my evil role model because if I ever go over to the dark side, I’ll become like Harley. I read and absolutely loved this, the cover is fantastic, the story is fun and I’m hoping this might mean Harley’s series will make a comeback. For me this was 100% the best thing about this months crate.

And as usual our Loot Crate pin, not something I’m particularly excited about BUT I love the fact they’re proper pins now!.

Overall the standard of the Loot Crate has gone up (unlike the crappy soap in the Dead box last month). I’m really impressed with what’s in my box, I think the biggest let down was the wallet and the biggest thing to impress me was the Harley exclusive. After this month I’m definitely keeping my subscription going and hopefully this standard will continue.

Let me know if you’d like to see more unboxing blogs and what I should try next!

Happy Birthday to my neighbour and bestie @tanya_oconnor74.
Everyone, meet the newest Miller.
Off on an adventure 💙
Currently reading (and loving) 🐝