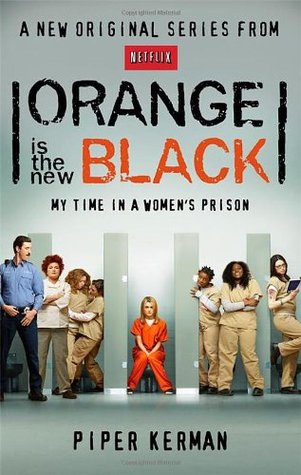 “Prison is quite literally a ghetto in the most classic sense of the world, a place where the U.S. government now puts not only the dangerous but also the inconvenient—people who are mentally ill, people who are addicts, people who are poor and uneducated and unskilled.”

Most of the world (well the people in the world with a Netflix account) have seen or heard of Orange is the New Black. News that it’s been renewed for another 3 seasons saw Twitter go into meltdown with excitement. If you haven’t heard of it Piper Kerman goes to prison for a crime she committed in her 20s, her past has now caught up with her. I watched the show when it first came out and wasn’t hooked, it wasn’t until I watched Piper’s Ted Talk that I decided I was aware of the book.

I was surprised to learn that the book was far from the scandal and romps shown in the show. Kerman is thoughtful, intelligent and committed to  helping prison inmates all across america, quoting statistics about the numbers in prison that seem impossible, but are sadly true. The vast majority in the prison during Kerman’s stay are either poor, uneducated or an ethnic minority, most without even a high school education. It made me think a lot about prison rehabilitation and why, on so many occasions, it fails.

Of course there are rivalries and groups within the prison system, there are inmates that are to be respected and at times feared. Gradually Piper seems to gain relationships throughout and actually show these women as the people they are, not just what they’re branded in the media. There are mothers, sisters, aunts and friends behind those bars who can create a sense of comradery, particularly when one of the women is going home, particularly after a long stretch.

The book does start off fairly slow, and can be confusing at first as there are flashbacks to the drug smuggling that puts Kerman in prison in the first place, apart from that I have very little criticism. This is an incredibly well written and thought provoking book. Of course Kerman isn’t stupid, it isn’t about sob stories for women behind bars, instead it questions the society which these women have come from. I think that’s what I liked most about it, that it shows a wide spectrum of women.

I gave this book 4 stars ****. As I said it’s quite slow to get into and can be confusing at times, which made it easy to put down at the beginning and that’s such a shame because it is a really well written memoir.  The passion and intelligence makes this book what it is, Kerman is incredibly talented and has spoken loud and clear to the masses, who otherwise wouldn’t think twice about prison inmates. I’d definitely give this a read, although you have been warned that it’s not like the TV show, it’s so much better.

Happy #bisexualdayofvisability to all my fellow babes repping the pink, purple and blue.
Rupi Kaur with @frankiewildish 🥰
Happy 7th birthday to this beautiful fluff ball, I love you with all my heart Ed. 💙
Autumn mornings 🍁