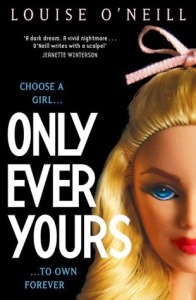 freida and isabel (intentionally lowercase)are finally in their final year at the school, all of their training will finally come in use as they fight to become companions for the wealthy young men who will come to choose them. The girls are high in ranking and expected to breeze into their lives as companions, that is until isabel does the unthinkable, she starts to gain weight. Can freida save them both in time?

I want to start this review by saying that I was surprised by this novel, it’s not something that I would usually pick up but the blurb was intriguing and the cover was more than a little creepy. I don’t think I was fully prepared for the novel and the social implications that it covers, because they’re not explicitly advertised. I’d have to say that there are some strong crossovers with that I know about The Handmaid’s Tale. It’s definitely different to novels that I normally read and it’s made me a lot more interested in dystopian fiction, so we’re on a good start!

So, a little background information, the novel is set in a world far into the future. Children are now created and only boys are brought up and given opportunities, girls are sent to the school to learn the ways of a perfect woman, be judged, ranked and immaculately dressed. They are told the importance of breeding healthy sons until they are deemed no longer useful. For those who are not chosen to live as Companions, live the lives of the Courtesans whose ambition is to sexually please the men of the world.

As I previously mentioned, the eves as they are named, all have lower case letters, they are not deemed important enough for a capital letter in their name. O’Neill makes a strong case for examining how we look at beauty and how we judge young women, yes we are not in the state that plays out in the book but how do we look at beauty and young women? There is an incredibly strong and well thought out message of feminism and the whole modern concept of a woman, we focus so much on our looks and being ‘ranked’ by other people on social media, it’s a scary glimpse into a terrifying world.

This is generally a fast paced and eerie novel, I loved the ideas and especially the relationship between freida and isabel. The girls aren’t given love or anything in terms of a motherly relationship so the relationship they share is even more incredible. Some people have argued that parts have a mean girls type feel and I can see where their coming from but I feel like it’s a lot deeper.

I’m giving this novel four stars ****! While I think it was very well done, cleverly put together and seeing as this is a debut novel (!!) we can expect great things from Louise O’Neill, she’s not afraid to tackle unpleasantness and things that we would rather not think about. The only thing I wasn’t that keen on was the ending of the novel, it wasn’t that it was bad, it just wasn’t what I was expecting. I’d love to hear what all of you think of the ending, so give me a comment below! Now, excuse me while I try and find a copy of O’Neill’s latest novel ‘Asking For It’, what seems like it’s going to be another unflinching novel.

Next Week’s Review: The Skeleton Cupboard

All reviews by Chloe Metzger and are not sponsored.

One thought on “Book Review: Only Ever Yours – Louise O’Neill”

When the husband takes you to Tesco and you leave with two presents.
Forgot to post my November faves!
Ready for day 2! Let’s gooooooo.
Met the lovely @brewandbakes today and wow what amazing treats. 😍