This week I got to meet one of my idols. You may have heard of her, seen her books or watched one of her TV shows, the latest being Extraordinary Births for Channel 4, she also has her own charity for burns survivors. I add that last because there are a lot of things that Katie Piper is and she’s not defined by the fact that 7 years ago she was in an acid attack, she’s a survivor.

Katie’s from a few towns over from me, so when it happened, there was a section in the paper, although not identifying her. I’ve followed Katie’s story and work since the beginning. Meeting her is one of my dreams and it finally happened. She’s absolutely lovely and her talk was inspirational, I didn’t expect any less. I’ll admit that I almost cried but I felt so empowered, I felt like I could do what she had done and take my past and turn it into something positive. 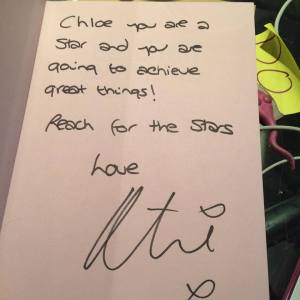 My message from Katie

I was able to get some 1-1 time with Katie, she remembered tweeting me a while ago when my spine broke, we spoke about Basingstoke town centre (we’re both local). She’s so lovely and sweet, I told her if there was anything I could do for the Katie Piper Foundation then just to let me know. The book she gave me has been waiting since the KU Talent Awards when she was supposed to host but her esophagus burst.

It was a great evening and I don’t think I’ve ever been more inspired by someone, she is what I aspire to be and I will keep using the power of positive thinking and hopefully I’ll meet Katie again.