If there’s one thing I cannot resist it’s offers on books, wherever I can get my hands on them bookshops, car boot sales, charity shops, online, Kindle books, you name it. While I like libraries and they were certainly important when I was younger, I love having my own books. I had two books to exchange and a £10 voucher for Waterstones, so of course I had a little buying spree today. I got six books in today’s haul, mostly on buy one get one half price and another book from Amazon that I ordered a few days ago.

All the Light We Cannot See – Anthony Doerr

This novel was recommended to me by a bookseller a while ago, he had just finished reading it and said it was incredible. The novel is set in World War Two (one of my favourite settings) and it’s protagonists are a young Hitler Youth and a Blind Girl on the run with her father, I’m intrigued. I’m interested to see how Doerr presents a blind persons perspective, it’s exciting and is probably part of what sold the book to me!

The Bone Clocks has a stunning cover, which it what initially caught my eye. There wasn’t much information about the novel on the back but after a quick search it sounded worth picking up. If this isn’t interesting enough, I don’t know what is ‘Holly is no typical teenage runaway: a sensitive child once contacted by voices she knew only as “the radio people,” Holly is a lightning rod for psychic phenomena.’ I’m taking a total risk with this novel, I’ve never heard anything about it but I’m really hoping it’s something great.

I picked this up because it sounded fun but seemed to have a heart. Set in the 1970s with a 16 year old protagonist who seems like a normal teenager and possibly a little lost. According to the front cover the Sunday Telegraph called it ‘acidic social satire’, sounds good to me!

We Are All Completely Beside Ourselves – Karen Joy Fowler

I have hear a lot about this novel. It’s been everywhere, recommended by everyone and involves one of my favourite things in literature, complex relationships. I hate the ‘normal family’ because frankly it doesn’t exist so knowing that this novel is about a whole family (although only narrated by one of them) drew me in as well as it’s raving reviews. I hope it lives up to the hype. 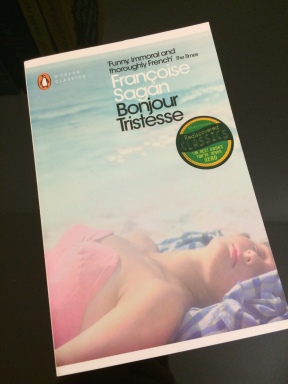 Another ‘wildcard’ I had to pick another on buy one get one half price, it was at the till point and all I was told was that it was good and ‘very French’. So let’s see…

Another recommended read. Again I’ve heard a lot of good things and haven’t read much of Hornby and I might be going to a reading of his this week so I thought I might as well pick it up. I was also surprised to learn he studied at Kingston University, so hopefully I’ll enjoy it.

How To Be a Woman – Caitlin Moran

Now I read this when I was a young teenager and hated it, but now I think I didn’t really understand it, not properly at least. Now I’m going to be studying it or partly at least and I’ve watched some of her youtube videos, so let’s try again.