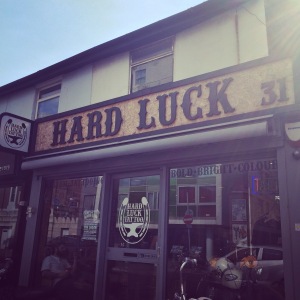 I’ve been writing to you all a lot about how I’ve been feeling and I’ve had overwhelming support from you all, thank you! So I decided to do something about it today after getting yet more bad news this afternoon about the Foo Fighters concert (it’s now been cancelled but this afternoon when I called they told me I couldn’t change me ticket and questioned whether I really need my wheelchair for an event like that. Yes, unfortunately I do. Either way I was feeling a little down and overwhelmed about the whole thing, as well as getting my head around a new job. I mentioned yesterday that I’d be getting my new tattoo at some point and that was today! I hobbled off the bus to go into the two good tattoo places I know about in Kingston. The first, although known for it’s service I just didn’t get the right feelings from, it was too dark and I just felt uncomfortable. So I headed home disappointed, sulked a little and ate a lot of chocolate while trying to make some work plans. After that I thought screw it, I’ll go to the the place across the road. I fell in love with it, the atmosphere, the staff and the tattoo artist. They quoted more but it just felt right this time, more so than I did about my first tattoo.

I wanted something simple, yet meaningful. My first tattoo I got when I failed my driving test the first time (well I didn’t know there would be another 4 times to go until I passed). I wanted to remember that it’s ok to fail, because I’m a perfectionist and I don’t take failure well (ask the poor wall at my parents house that I threw my shoe at). This one was different though, I’ve toyed with a lot of ideas, lyrics, symbols thinking of what I wanted to represent getting through, getting better and to motivate me when times are really hard. I found the idea on Pinterest and fell in love with it instantly and I knew that’s what I wanted. I waited though, to make sure.

I had the words ‘One day at a time’ tattooed on my left wrist. If I ever need help, reminding that I’ve come through before or just some comfort it’s there now forever. I’ve sat here staring at it all afternoon, it just fills me with happiness. Before I get it in the comments, yes it did hurt, no I wont regret it. It’s something so simple but means so much to me.

Now I wouldn’t recommend that every time someone feels really low they get a tattoo, it would be super expensive but this is something I wanted for a long time and it felt right to do it now.

Yes it has been a rough past few days but now I’m more determined than ever to make the next few great. Tomorrow will be one of my last times seeing Eleanor before she goes off to New Zealand (sob) so I’m making sure there is lots of laughter, going back to band practice, before our acoustic show in Guilford and celebrating Laura’s 21st at the weekend :). And if I need any extra help? I just need to look down.