Last month I came home to a wonderful package from Portobello books with an early release of Convenience Store Woman by Sayaka Murata in exchange for an honest review. The novel is set in Japan being released as a UK translation on the 5th July. So, what did I think of it?

This novel is very different from anything that I’ve read before. It’s the first novel I’ve read that was set in Japan and that was definitely a culture change for me and something to get used to. The protagonist is a Convenience Store worker in her thirties, something that is against social norms. From what I could understand from the novel this is not the done thing for a woman in her thirties, who is expected to either have a good career or marriage. However, Keiko knows that she is not ‘normal’ and this is central to the plot.

To me, it appears that Keiko is on the Autism spectrum, although this is never confirmed in the novel itself, instead, she is described as ‘odd’ or ‘different’. Her struggles with social interaction broke my heart, for the entirety of the novel, Keiko is trying to mirror the ways of those around her so that she is accepted. Even as a child Keiko struggled with what was socially acceptable, while her parents searched for a ‘cure’ to her.

That said, the novel did make me laugh a few times, Keiko is a charming protagonist. She see’s things in a certain way which, when you think about it makes sense. For example as a child as she watches a fight break out in the playground and someone shouts to ‘stop them’ Keiko does…by hitting them with a shovel. She also notices social norms that don’t make much sense, such as the fuss over crying babies. In this respect she is excellent.

Soon, Keiko feels the need to evaluate her life again following more pushing questions from her peers. Should she be more than a Convenience Store Woman?

This is definitely different to something I would have normally picked up but I actually enjoyed it. It gave me a glimpse into another culture and their expectations. I really liked Keiko as a protagonist and gave this 4 stars. If you’re looking for a quick read that’s a little different I’d definitely give it a go.

I also want to say a HUGE thank you to Portobello Books for sending me a lovely package including some Miso Soup, a mini KitKat, some adorable sushi erasers and a wrap, which I believe is traditionally used to wrap food in Japan. They also sent me my very own ‘staff tag’ for the convenience store! Thank you so much! 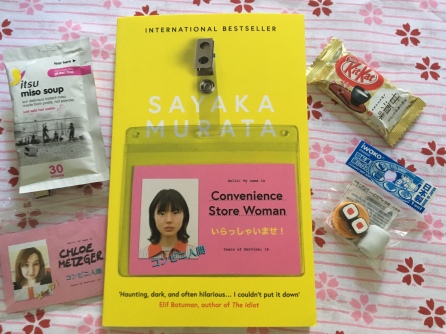