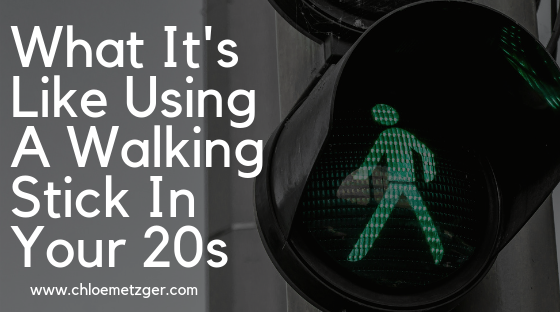 This year I want to talk more about living with a chronic health condition. I’ve decided I’m done with it being a secret – this is me! Something that I found difficult at first was using a walking stick in public – and I don’t think I’m the only one!

As with many invisible illnesses people can misinterpreted why you need that seat on the bus/tube/train. Even with a ‘please offer me a seat badge’ I always felt that people were questioning me with their stares. I look young and healthy, ‘too young to have those problems’ as people have told me.

Way back when I initially broke my back, walking was a struggle and while I was recovering I still found a numbness in my legs that came and went. When I had to go out for the day I used a crutch to try and balance myself, hoping that with time and exercises the feeling would come back properly.

After a period of time I was diagnosed with Fibromyalgia and a big part of living with it is finding ways to make you illness more bearable and control the illness rather than the other way around. One of my friends used a foldable walking stick, so I hesitantly ordered one.

I’ll admit when I first got it I hid it away. I was embarrassed – there weren’t many nice designs and it felt so old. That was until I knew I was headed into London – I’d need the support, so I took it with me folded in my bag ‘just in case’. And, you guessed it I ended up using it.

I’d love to say after that I didn’t feel self-conscious, I still do sometimes! Going to Disneyland in September was the most I’d used it in one go, as well as a wheelchair. I was suddenly self-conscious, I didn’t want people to think I couldn’t do stuff for myself or feel sorry for me – and I think that was my biggest fear. That this would take my independence.

It did nothing of the sort, in fact it made me feel prepared. Because I have one that folds down it means that I can see how I feel and if I do need to use it, I can. The biggest block for me was mental. It worried what people thought and now I’m happy enough to tell them why I use it and if they don’t like it that’s their problem.

Using a walking stick in my twenties wasn’t exactly how I thought things would go but I really have 2 choices. I struggle to walk and am in a lot of pain on days I would like to enjoy myself, or I use the damn stick. Which would you choose?

Cuddles with Merilwyn 💙
It seems I have been replaced by Miss Daisy 😂
Little friend 🐈
We love you Mr and Mrs Andrews!